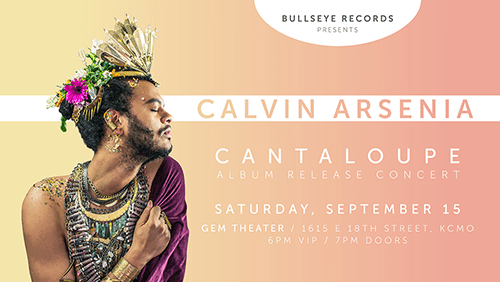 From Catastrophe to Cantaloupe: Kansas City’s alternative harpist is releasing his upcoming record at the Gem Theater.

On September 15th, Arsenia will unveil the music of his sophomore release, Cantaloupe. The Cantaloupe album release takes place three weeks before the international launch of the record, giving Kansas City friends and supporters a first listen to this theatrical album.

Arsenia excels on multiple traditional stringed instruments, Celtic harp being the most unique, though when Arsenia sings, it’s no wonder why audiences across North America and Europe are delighted and rocked by his radiant wake. With his elaborate and immersive performances continuing to surprise and delight audiences, Arsenia creates harp-heavy, romance-driven pop music with immersive theatrical and sensory experiences.

The Kansas City native has gathered a mighty cast of musicians spanning the local jazz, classical, and folk communities to immerse you in sonic bliss for a one-night only performance (Let’s not forget Catastrophe!). Laying the foundation for Arsenia’s electric harp and silky voice will be percussionist Simon Huntley, the Sextet’s Robert Castillo on bass, jazz pianist Charles Williams, and electronic musician and producer J Ashley Miller. Also featured will be a 6-piece string ensemble with Tina Bilberry and Carmen Dieker on violin, Alyssa Bell on viola, Ezgi Karakus and Eman Chalshotori on cello, and Rick Willoughby on upright bass. Flanking the other side of the stage will be a brass-wind ensemble featuring bassoonist extraordinaire Rachel Lovelace and Billy Winston on soprano sax and flute. Joining Calvin on vocals will be Jessica Paige and Ashley Jean Rippeto.

Since 2016, Arsenia has graced Helzberg Hall on multiple occasions performing his original music with the likes of Kansas City staples Jeff Harshbarger and Clint Ashlock, and he has been featured on recordings with Brad Cox and Krystle Warren. He’s also been a regular performer with KC’s cirque nouveau collective, Quixotic. In 2017, Arsenia and Huntley set out on the “Outlyre Tour” showcasing music from Arsenia’s first full-length record, Catastrophe, in over thirty concerts covering nine different countries in North America and Europe, the most notable performance being at the Edinburgh Fringe Late Night Lip Service queer cabaret at The Rose Theatre. While in Sweden, Arsenia also performed alongside Egyptian activist-musician Ramy Essam. This Kansas City performance is wedged between two other tours back in Europe, and it promises to be an evening not to miss. 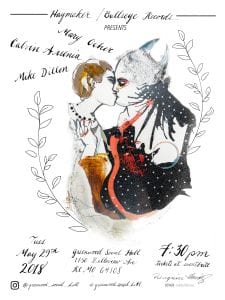 The night’s entertainment takes place in the comfy confines of the private arts venue The Greenwood Social Hall. Converted from a 1920s Baptist church, the space offers an intimate setting and amazing natural acoustics suitable for the performances on vibraphone, harp, piano, guitar, keys, percussion, and vocals. MikeDillon has been praised as a “punk rock provateur”, a “jazz vibraphone visionary”, and a “percussion virtuoso”,having worked with such artists as Les Claypool, Rickie Lee Jones, and Ani Difranco and performing in groups such as The Dead Kenny G’s, Critters Buggin, Hairy Apes BMX, and Billy Goat. Dillon joins the stage after multiple May appearances at New Orleans Jazz Fest. Recent Bullseye Records signing Calvin Arsenia, accompanied by a percussionist, will highlight his skills on harp, piano, and classically trained voice. A mix of bizarre and experimental musings with swooping, hearty melodies, and raw acoustic emotion form the gentle, heartfelt style that defines his music. Berlin multidisciplinary artist Mary Ocher’s work is as enchanting as it is polarizing, guiding itself through genres as diverse as traditional folk, raw 60s garage, synth-driven ambient, and experimental pop. She’s back in North America with her new album “The West Against the People” and its companion release “Faust Studio Sessions”, following a European release tour of 20 countries. “The West Against The People” was released on the German label Klangbad in spring 2017 and recorded with Hans Joachim Irmler of Krautrock pioneers Faust.